Lately, we've been thinking about letters. Mostly ones that you write in a card and send to a friend, but what about those other letters? Tiny illustrations in and of themselves, talented artists have built whole careers on typesetting and laboring over the love that is language and letters. Illustrated alphabets are just the tip of the pro-VERB-ial (pun, intended) iceberg, but it's a fun one at that. We found a few of our Red Cap artists have created delightful alphabets themselves, and found a few more that are sure to inspire. See below for the images and a quick interview with Anke Weckmann by Frankie magazine. Enjoy!

TRANSCRIPT: What was the general concept for your alphabet? I put the font together with simple shapes and little branches and leaves. I used my handwriting for the basic design of the letters. Tell us about your inspiration. I was inspired by trees, especially the tree outside my window. Aside from your newly made one, what’s your favourite font an why? I love Carson Ellis’ hand-lettering which she uses on her website and in her illustrations, book-cover and poster designs. Her work is beautiful. Talk us through the alphabet-making process. I spent a cosy afternoon in a cafe drawing random ideas in my sketchbook. After deciding on a concept I pencilled and inked all the letters on paper. They they were scanned and coloured digitally. How long did it took to put together? A little over two days. Which letter was the trickiest to pull off? I think it was the Q. It looks like such a simple letter, but I kept changing my mind about how it should look. Which is your favourite and why? Probably B. I always like writing Bs and varying their shape each time I write/draw one. What’s the name of your font and why did you call it that? It’s called Perennial, the latin word for a plant that lives longer than two years. I chose it because a tree is a perennial and mostly because I think it sounds pretty. Did it turn out like you’d hoped? I’m pleased with the outcome. Of course, as with any project, there are always things one could tweak… What kinds of uses can you see for this font? I can imagine the font being used for a title on a poster or a banner. Or single letters being used as an initial on a page. It could be used for the title of a story about a secret forest or maybe on a leaflet for a lovely park.
Red Cap artist, Anke Weckmann for Frankie Magazine 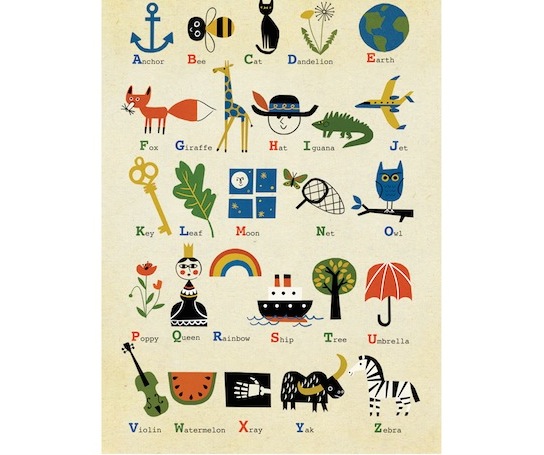 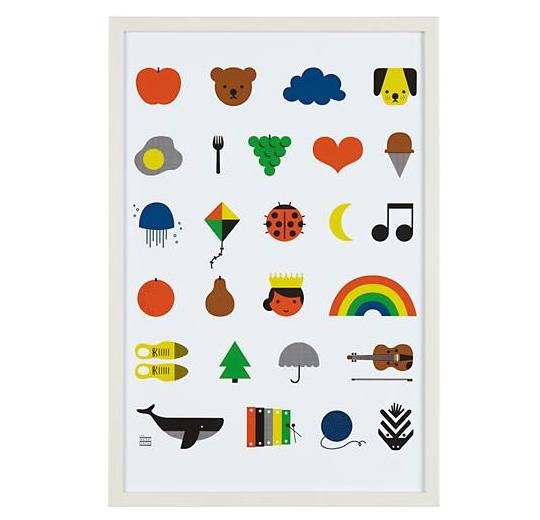 No alphabet required! A fun A to Z Wall Art piece we found at Land of Nod, by Erin Jang.

Images as linked above.