I Want My Hat Back at the National Theatre

A bit of exciting news has made its way to us, via the grindstone. According to Red Cap artist, Jon Klassen (himself), the National Theatre in London, UK is working on a musical stage version of I Want My Hat Back 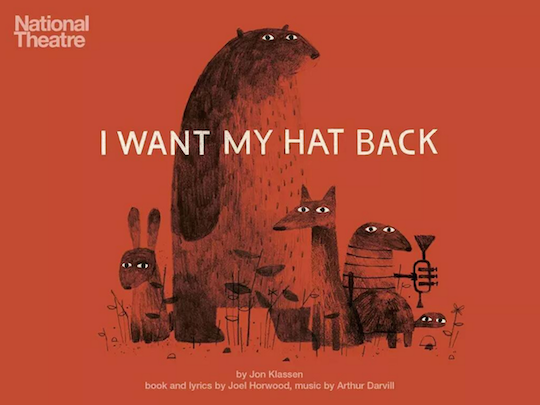 Bear’s hat is gone. He loves his hat. He wants it back.
He asks all of the animals in the forest, but no one has seen it.
WAIT! He has seen it somewhere…
Jon Klassen’s brilliant, witty book was published in 2011, and has fast become a modern children’s classic. I Want My Hat Back

now comes to the stage in a joyous new adaptation stuffed with humour, music and surprises.
A treat for everyone aged 3 – 300.

We might just have to take a trip to London for this one. Break a leg, Jon!